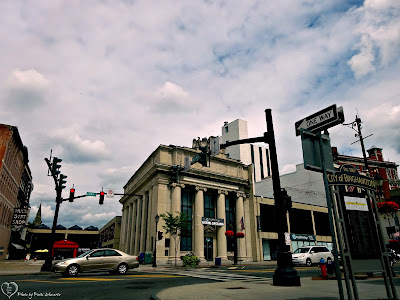 This morning, I was gently reminded by our good friends over at Facebook headquarters of a status update posted three years ago on my personal timeline. Posted before this blog and its own Facebook page were even in existence:


"What a difference two decades make! 20 years ago, I became a Binghamton resident. A Binghamton that resembled a ghost town after dark and on the weekends. A Binghamton where the only entertainment to be found was roaming the mall (in Johnson City) or getting in your car to explore Ithaca, Syracuse or Scranton. Now residents from those areas (and many others) are coming here to participate in the seemingly endless list of activities and events going on. There are festivals, art walks, local theater productions, masquerade balls, races, golf tournaments, concerts, various sports events, and, even duck races thrown in for added excitement. The sidewalks are busy (maybe, not bustling - but it is not New York City and should not be compared to it). We are now at a point where instead of saying, "there is nothing to do here", we are asking ourselves, "how do we find the time to fit everything in?""

Three years later and Binghamton is better than ever due in a large part to the ever growing community of people who put their hearts and souls into making a difference. People who refuse to allow the naysayers and their perpetual negative commentary from slowing them down. Individuals who provide outlets for creative, artistic and musical expression to be enjoyed by their fellow Binghamtonians; which in turn sparks all our imaginations of the future of the area.

Folks who understand that their efforts are to be viewed as complements to what our local government officials and business owners are striving to accomplish in what can only be described as a renaissance. These men and women, for the most part, do not expect or demand any compensation for their efforts. The simple show of support and the smile on the faces of those who partake in the fruits of their endeavors is compensation enough to last a lifetime.

The next time you attend an event of any kind in the Binghamton area, please take a moment to thank those that made it possible. Remember, if not for them, Binghamton would still be a ghost town complete with tumbleweeds blowing down Court Street.