My Not So Close Encounter with the President

Today was a big day for the Binghamton area!  President Barack Obama was coming to town.  It would be the first time a sitting US President came to this area since Bill Clinton in 2000.

Due to scheduling conflicts, I knew I would not be able to take part in any of the excitement. I was already committed to driving my youngest up to college. Being a mom must take precedence over everything. Sorry, Mr. President, I think you would have to agree with me on this one.

Not to be completely out of the loop, I posted an invitation to the President on Facebook and Twitter. I suggested that we meet half way between Binghamton and Syracuse for a cup of coffee and to catch up on our lives. Having been social/digital media coordinator for the Binghamton team, I was certain he would oblige.

Alas, he never confirmed that we would meet.  Undaunted, I sat in the car with my trusty Blackberry set to camera mode.  I was determined to get a picture of "Bus-1" and its accompanying motorcade as they traveled from the Syracuse area toward Binghamton.  I was ready to have the first photo as he neared his destination.

As we left Binghamton this morning, I noticed North Otsiningo Park (the former rest area site) was packed with protesters and their signs. Unfortunately, as I went to snap a picture worthy of being picked up by the local paper, my driver (okay, husband) shifted lanes and the semi-truck, now on the right of me, was blocking the shot. 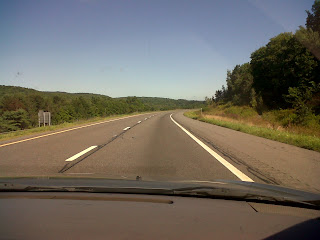 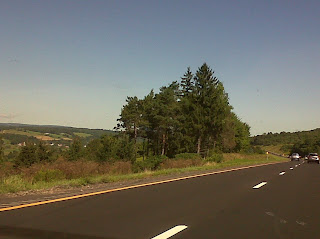 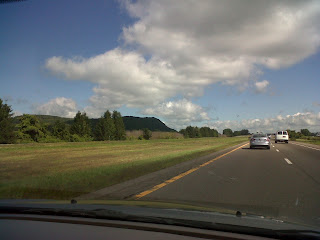 We noticed that the turnaround lanes in the median were blocked with orange cones. Other than that, everything else appeared normal. It looked like it would be smooth sailing for the duration of the trip. A quick check of twitter revealed that the President was on the move through Skaneateles   It seemed possible that our paths might cross.

Around Cortland, we noticed a dramatic drop in traffic in the southbound lanes.  In fact, other than an occasional NYS trooper, there was no other vehicles.  It was at this point, my excitement level increased. 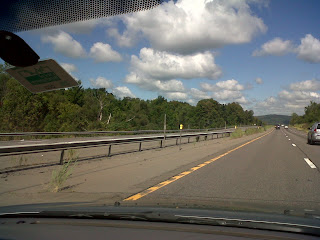 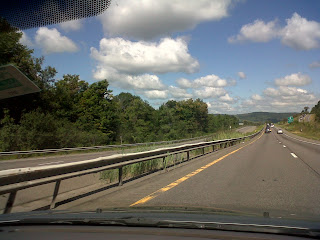 I strained against the seat belt and craned my neck every time our side of the highway changed elevation.  I never noticed until today that for most of the hour trip to Syracuse you do not see the oncoming traffic lanes. 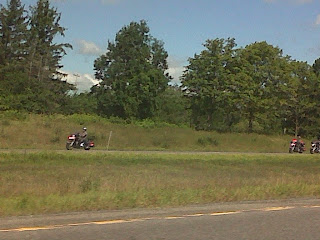 Unfortunately it was not meant to be. As we continued on, we notice a big black bus at a gas station surrounded by the flashing lights of emergency vehicles.  In fact, it there were so many flashing lights that it reminded me of Studio 54 back in the day.  It was too far away for a camera phone to get a clear shot.

As soon as we hit the Syracuse city limits, I knew that I would not get that photo.  It was then that we saw the backup of southbound vehicles. I knew that my disappointed was probably nothing compared to those attempting to go on their way. 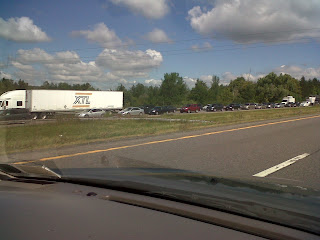 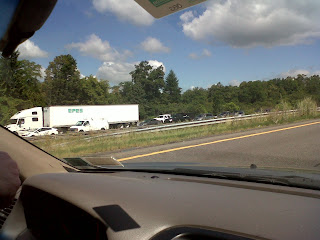 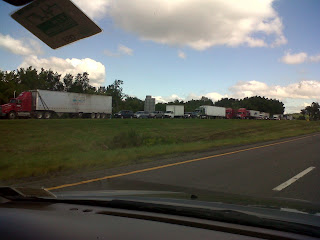 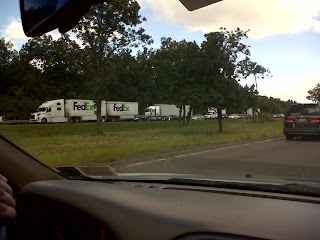 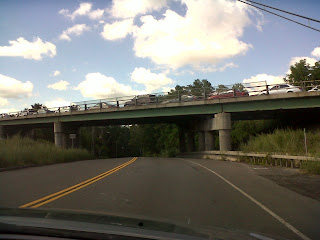 Even though I was not able to share our area's surge of patriotism in person; I was able to feel it through all the twitter and facebook alerts coming to my phone.  Binghamton University, the entire Broome County area, and even the Spiedie, received POSITIVE national attention today.  For that, we should all be proud.