Galaxy Brewing Company - Out of this World

Tonight was a gastronomic experience that one can only describe as out of this world.  Having an employee as a family member, allowed me to receive one of the coveted invitations to the Friends & Family Night at the new Galaxy Brewing Company (41 Court St., Binghamton). Originally scheduled for Thursday, it was pushed to this evening.

When I arrived, I was greeted by friendly staff.  They introduced themselves and made sure I was comfortable at the bar while I waited for my dinner companion. 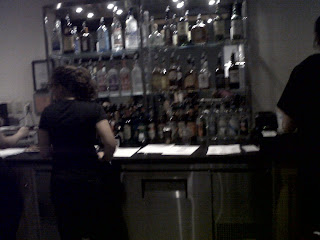 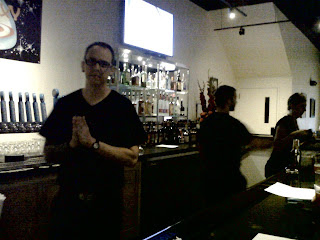 The bar was clearly set up to accommodate any drink order from a martini, cocktail, wine (there is a full wine list) and, of course, handcrafted beer.  Being that this was an establishment with the word brewing in its name I, of course, was clearly going to stick with the beer.  They had 3 distinct choices on tap.  Coming in there blind (and being a Coors Light girl normally... don't judge), I asked for a description of each before making my choice.  The bartender appeared to be thoroughly versed in her descriptions of each of the 3 choices. However, just in case there was a daily beer menu for a full description of each brew.  I decided on the Galactic Silk Ale ($5 - 16 oz pour/ $4 - 10 oz pour). It was a smooth amber with notes of caramel and a super creamy head.  It was slightly reminiscent of a Guinness but no where near as heavy. 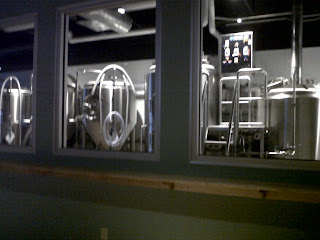 One cool thing about the bar area was the glass enclosed brewery directly across of it. It was a nice feature only to be made better if the patrons could see the brewery in operation. Maybe that will be something for the future.

Once my dinner companion arrived, we were promptly directed to our table. The table happened to be on what one could only describe as a stage.  It was a raised area above the rest of the dining room which I could only assume would host live entertainment in the future. Our table gave me a clear vantage point of observing not only the other patrons but the staff as they made their way through the dining area to the kitchen.

Before I get to the food, I must tell you about the decor.  The color scheme of pumpkin and, what I can only describe as, pale teal combined with the exposed industrial ceiling ducts and metal pillars gave off an ambiance I can only describe as "Soho-istic".  The seating was spaced in a way that you could easily carry on a conversation without worrying about others overhearing but not spaced too far apart that it seemed stark or empty. 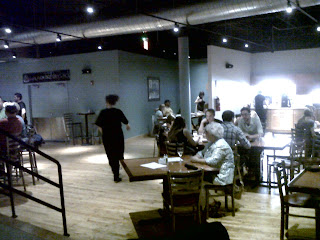 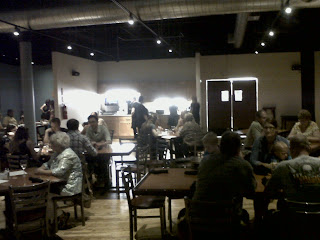 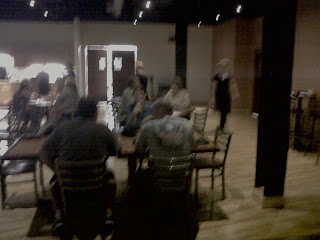 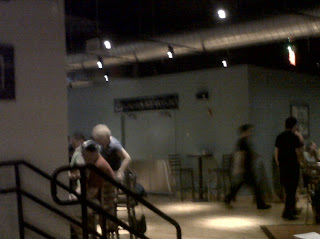 Now, let's get to the food.  Since this was billed as the final night of training for the staff, the full menu was not available.  Believe me, that did not leave you lacking options.  We started out with the Crispy Pork Belly ($9) as an appetizer to share.  I also ordered the Basket of Fries ($5) at the request of my son (yes, the family member employee) who would be joining us during his break.  The pork belly was tender and flavorful.  It was served on an ale Dijon celery root puree with apple, fennel and a cider vinaigrette. Although there was plenty for two of us to share, I would recommend ordering one just for yourself; it was that good.

For our entrees, we ordered the Bone In Pork Chop served with an apple wood bacon white bean ragout, pears and fontina cheese ($17),  and the Chicken Sausage Jambalaya ($16).  On the recommendation of our server, we switched our beer choices to St. Stusan Ale for the pork entree and the Beer #42 ESB for the Jambalaya.  Both were excellent companions to our entrees.

The only suggestion we would have is that there be

2. A chef's recommendation on the menu as to which beer would pair best with each entree would be helpful.  We are fortunate enough to have a server who was proactive enough to offer his recommendation.  This may not be the case in the future; especially when there is a full dining room of patrons to be served.

The full menu offers everything from starters and snacks, salads, soups, burgers and sandwiches, stone pizzas, mussels, entrees and a kids menu. Galaxy Brewing Company has the potential of becoming the go to place for young professionals, families and the university students.  The price range and selections would appeal to every budget.

I would strongly recommend that you stop in and give them a try.  Their grand opening is scheduled for Friday, August 30th.  If you are unable to make it down then, they are also one of the newest participants in the upcoming Binghamton Restaurant Week (Sept. 17 - Sept. 26) and would be a great option for either lunch or dinner then.

Galaxy Brewing Company is poised to make its mark on the Binghamton Restaurant and MicroBrewery scene.  I, for one, look forward to their inevitable success; if tonight was any indication.